The blue oval, the bow tie, the pentastar, the tri-shield. Just by naming these generic shapes, virtually every person reading this can identify what brands they are associated with. There are few industries or products in the world that have that sort of strong recognition, but where did those logos come from? We got curious on the same topic so we started to poke around to get the answers. All of them have evolved over the years and while all the badges we’ll talk about have many of the same cues as the originals, none of them are exactly the same. That’s the nature of design we guess. Nothing stays the same forever. We’re not going to go through every car company, but we are going to go through a lot of them that you know about. From wall paper to family history, all of these logos are rooted in an interesting human story.

The Chevrolet Bow tie – This is one that has no true definitive answer. What is known is that Billy Durant was responsible for the logo, where he got his inspiration is the question. A commonly held story is that Durant saw the design on the wallpaper of a French hotel in 1908. The design stuck with him and it was then used on Chevrolet cars in 1913. There are other claims that he saw a business using a similar logo in a newspaper at about the same time and adopted it for Chevrolet. Other theories include a connection to the Swiss flag as Louis Chevrolet was born there and the Swiss flag has a cross on it. Perhaps the bow tie was a stylized tribute to that? No matter the origin, the logo has gone on to be one of the world’s most well known and enduring automotive icons.

The Ford Blue Oval – Classic script inside of a blue oval has identified Ford cars for many, many years but it isn’t the only logo the company has used. Believe it or not, the first Ford oval logo appears in 1912. It was not blue but rather a simple oval outline around the Ford script. One thing that has been constant since 1912 has been that script. The font has not changed a lick since it was first debuted. In 1928 the familiar blue was added to the oval and other than some shaping changes it was placed on every Ford car up until the 1970s when the logo was stopped for a period. It showed back up again in the 1980s and continues today. In 2003 an updated version called the “centennial oval” was introduced. Again, it wasn’t much more than a streamlining job on the design introduced in 1928. 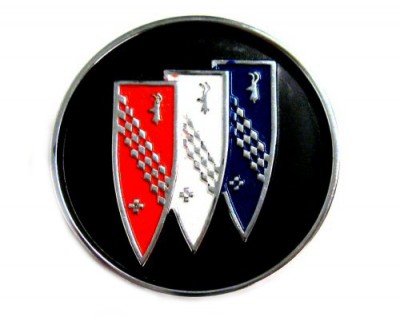 The Buick Tri-Shield – Here’s one that has morphed and changed as the years have gone on buy still today, all Buicks wear a variant of it. Buick didn’t really have much of a logo until the 1930s. Up to that point, the cars all had Buick written on them in script font. As the story goes, a stylist was tasked with coming up with a logo so the man went into research mode and looked up the Buick family’s coat of arms in Scotland (where they were from). He discovered that the design was a deer head in the upper corner and a gold cross in the lower corner, separated by a diagonal sash through the center. From 1937 to 1959 all Buick cars were delivered with a single shield badge on them. In 1960 the company went to the Tri-shield to represent the three cars it was selling at the time which were the LeSabre, Invicta, and Electra. Since then there have been variations of the Tri-shield on every Buick sold here and where they are most popular, in China. The shields no longer carry the designs in them but they make up the center of the badge. 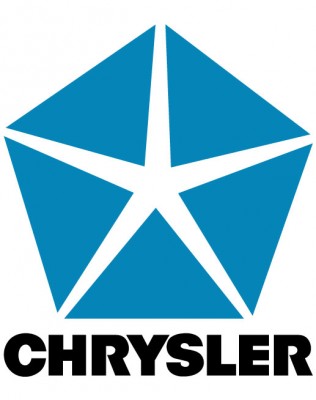 The Chrysler Pentastar – This is the new kid of the bunch so far, having been developed in the early 1960s as a way for Chrysler to have its own larger corporate identity rather than the scatter of its brands. Robert Stanley was the man who drew the original Pentastar and the “five triangle” design. Each piece represented a division of Chrysler. Imperial, Plymouth, Dodge, Chrysler, and Dodge trucks were what each chunk represented. Debuted on 1963 models, with small versions of the logo being installed behind the right front wheel on all Chrysler vehicles. The Pentastar had a good run that stopped when Daimler showed up and nixed it. When the Daimler disaster ended, the Pentastar came back in 2007 with a more stylized, steely, and 3D looking version.

With Fiat’s acquisition of Chrysler, the Pentastar may be living on borrowed time again. We recently saw a proposed logo for the new “Fiat-Chrysler Automobile Company” and it predictably looked like crap. We hope this symbol sticks around, but don’t count on it. 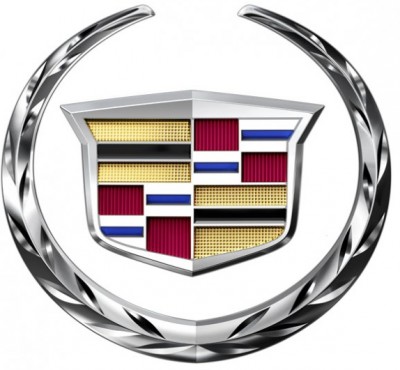 The Cadillac Crest – Few corporate emblems have both morphed and endured as long as that of Cadillac. Over the course of the last 112 years, the Cadillac logo has been changed, spiffed up, or otherwise altered nearly 40 times. The one constant in the whole thing is the family crest of Antoine de la Mothe Cadillac, the guy who founded Detroit in 1701. His family crest has served as the anchor for a badge that has had a laurel wreath around it, a V supporting it , a circle around it, and the crest itself has been used in various sizes. Cadillac has changed it once again recently and the laurel wreath is being dropped because stylists feel that it is old and dated. The crest itself is being widened and stretched some and will be prominently displayed on the full range of cars starting with the 2014 model year. Outside of the size and style changes, the badge has ridden on a cars that swung wildly in their popularity and quality. From the “standard of the world” era of the ’teens and 1920s to the Cimarron which is still regarded as the worst model the brand ever attached its name to. Happily, today’s Cadillacs are world class cars that stand in with competition from all over the globe and attract a younger demographic than ever before. 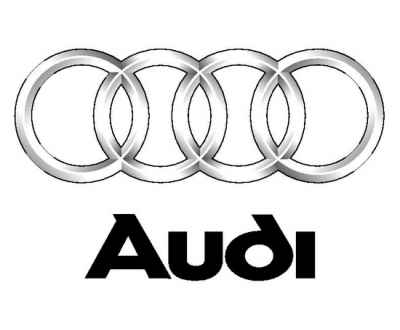 The Four Rings Of Audi – This is one of the most interesting logos that exists in the automotive world. It originated in 1932 when four German car companies merged together to form an operation that roughly translates in English to “Auto Union”. The four companies that merged together were Horch, DKW, Audi, and Wanderer. The rings each represent one of the companies. Over the years the rings have changed slightly to keep with the style of the varying eras they have lived through but no major alterations have ever been made. It is a design that will look contemporary until the end of time if you ask us. 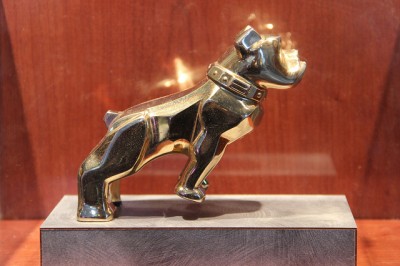 The Mack Truck Bulldog – Sometimes a nickname just sticks. During the throes of WWI, the British government needed tough, versatile trucks for their soldiers to use in the field. They orders a fleet of Mack AC models and soldiers were so impressed with their toughness that they started called them “Bulldog Macks”. The blunt nosed trucks did everything they were asked to do and more, helping the war effort a bunch. Despite the popularity of the nickname, which made it back to US shores, the company’s trademark logo wouldn’t land on the nose of a big truck until 1932 and even that is a pretty cool story.

Mack’s Chief Engineer Alfred Fellows Masury was recovering in the hospital from an operation and to amuse himself he carved a bulldog out of soap. He and his visitors loved it. After leaving the hospital he carved one in wood and soon it was trademarked and every mack that has rolled out the door since ’32 has had one of Masury’s carvings on the hood. When the company was still independent and manufacturing all of its major components, you could tell a pure Mack truck because the bulldog was golden. If the bulldog was chrome, it meant the buyer spec’d a non-Mack engine, transmission, etc. 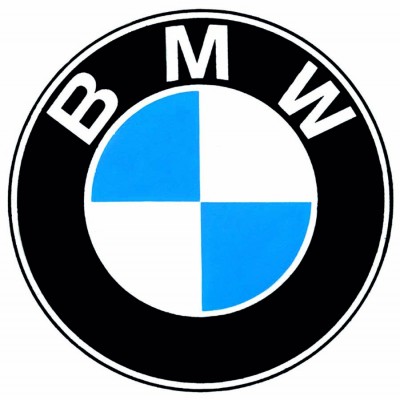 The BMW Roundel – When we talk about logos that have been unchanged for a long time, consider that the BMW logo was trademarked in 1917 and other than very subtle generational changes, it is exactly the same. The funny thing about this one is the fact that lots of people believe that the center of the logo it supposed to represent a spinning airplane prop. This is wrong. Blue and white are the colors on the Bavarian flag and BMW stands for Bavarian Motor Works.

The confusion on the airplane prop deal seems to stem from an advertisement from the 1920s that showed the logo in such proximity to a plane that people drew a connection. Also, BMW is basically sprung from the Rapp company, which was an airplane engine manufacturer in the early half of the 20th century. 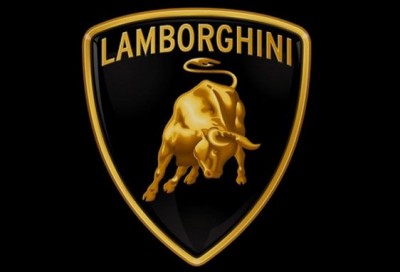 The Lamborghini Bull – It feels like there should be lots of mystery, intrigue and cool stuff happening with this particular logo. After all, the company began life as a tractor manufacturer before major domo Ferruccio Lamborghini decided that he wanted to go into the sports car business and take on the likes of Ferrari and others. So, what’s the big deal about the fighting bull that has resided on the company’s logo since it started building cars? Not much, actually. Lamborghini’s zodiac sign was Taurus, so a stylized bull was put on the badge.

Subsequently, models have been named after famous fighting bulls, but the story behind the badge that every Lambo has ever worn is one of the more mundane of the bunch, especially considering the fact that the company makes some of the most dramatic and controversial super cars in the world.