Plan to do a safe ride right

There’s nothing better than sleeping in your own bed after a fun night with friends and a few drinks. Of course, to get there you need a plan; a good one. Many of us have had the experience of thinking we have a safe ride lined up, right until it falls through unexpectedly. It can happen as the evening unfolds with a few extra drinks, more friends joining the fun, or maybe staying a little longer than planned. So, now what?

Safety tip #1: Making a new plan after a few drinks is not your safest option.

Make Plan B a failsafe option

Just to be clear…Plan B needs to be locked down before the fun begins. Convincing yourself, or letting your friends convince you that you’re still sober enough to drive at the end of an evening (just because you drank less), is often the most popular alternative. Unfortunately, this seemingly convenient solution contains a fatal flaws.

Research shows people (both men and women) are generally terrible at gauging their level of impairment, or blood alcohol concentration (BAC) after they have been drinking. Of greatest concern, it shows most people tend to underestimate their level of impairment just one hour after their last drink. In other words, there is an important distinction between feeling less impaired versus feeling sober. An hour after you’ve consumed your last drink, your BAC will begin to decline, but you are by no means sober enough to drive. You simply feel less impaired than you did an hour ago; However, it may still be several hours before you are actually sober enough, and safe enough, to drive.

As evidence of this, in a study of drinking and driving among women in Ontario, they reported feeling okay to drive when they got behind the wheel. However, partway through the trip they realized they were not but continued driving anyway. This is because they didn’t consider that their BAC would continue to rise as a result of consuming their last drink before it would begin to decline. It is for this reason, the impairing effects of alcohol make it difficult to accurately judge our level of impairment, which sabotages our ability to make safe decisions about driving.

And, while we all know men and women are different, did you know that women metabolize alcohol differently than men for two reasons.

This means women can become more same than men when they drink the amount of alcohol. So, irrespective of sex, choosing to drive yourself and your friends home is categorically not your safest option. Nor is it the safest option for everybody else who happens to be using the road. 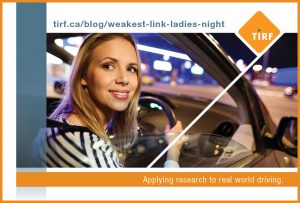 The impairing effects of alcohols our ability to drive safely (Sober Smart Driving) because it decreases situational awareness, cognitive processing and reaction times.

In addition, research has shown impairment of driving skills occurs at lower BAC levels and for this reason, most jurisdictions in Canada impose administrative driver licensing penalties at .05 which is below the Federal criminal limit of .08.

The risks associated with low levels of alcohol are compounded if you choose to consume marijuana along with it, because this combination can further reduce your ability to accurately gauge your impairment. In fact, both older and more recent research demonstrating the combined effects of these drugs pose a higher risk than either substance alone. One reason the combined use of alcohol and marijuana has more significant impairing effects on driving skills is the interaction between the drugs can increase risk-taking and users are less likely to recognize the potential negative consequences.

Safety tip #3: If you have to ask yourself if you’re okay to drive, odds are you’re not. 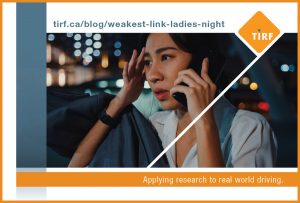 Many of us are familiar with the most popular options, such as call a cab, take public transportation, or stay the night. Of course, as a woman, finding an alternative at a moment’s notice can be a little more challenging. For many women, it often boils down to a difficult choice between personal safety and driving safety. This is because some tried and true strategies may be perceived as even more risky than attempting the drive home, even if the drive is short and familiar.

It may come as no surprise that women are reluctant to take public transportation, take a cab, or take a ride from someone they don’t know well, especially after they have been drinking. Women recognize they are more vulnerable and less vigilant as compared to when they are sober which can affect their perception of risk. In fact, women are more likely to opt to drive after drinking instead of choosing other transportation options to ensure you have a safe ride home. And while this may seem like the safest option, it is not when you consider the risk of crashing on your way home, which puts yourself and other road users at risk of injury, or worse.

Safety tip #4: Help female friends by asking whether they have a safe ride or need a safe ride when they are out drinking. 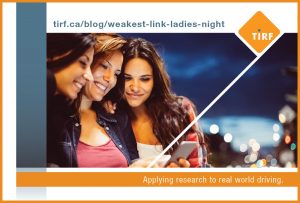 So, how do we make sure we get home, and into our own bed, safely after our plan to drive home is no longer the safe option? Make a plan before you go out and it’s crucial to keep that plan top of mind and reassess it as the evening unfolds. More importantly, make sure your plan has two parts, so you’re not left figuring out Plan B after you’ve been drinking.

No one wants to be the weakest link in a night out. Likewise, no one wants to feel pressured to drive when they know shouldn’t. Remember, drinking less doesn’t necessarily make you safe to drive. And for women, both Plan A and Plan B should involve transportation options that balance those real, personal safety concerns with getting home safely.

Safety tip #5: Speak up and tell them “I have a safe ride, let’s ride together.”

Let’s work together to keep each other safe! 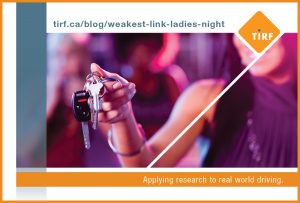 Women’s Straight Talk Series on Drunk Driving – What if? https://tirf.ca/blog/womens-straight-talk-series-on-drunk-driving-what-if

Women’s Straight Talk Series on Drunk Driving – Can anybody hear me? https://tirf.ca/blog/womens-straight-talk-series-on-drunk-driving-can-anybody-hear-me 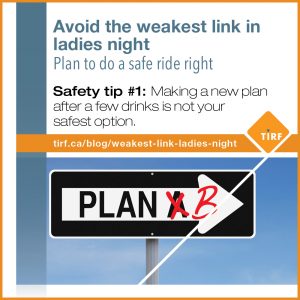 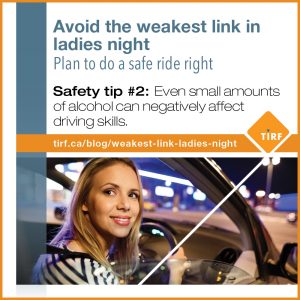 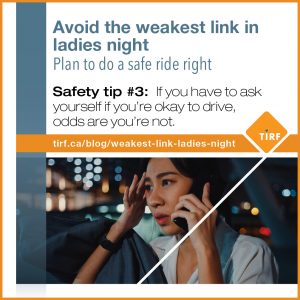 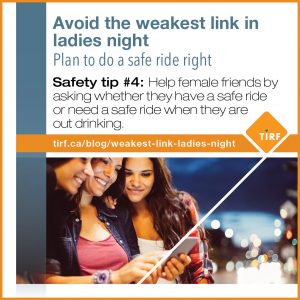 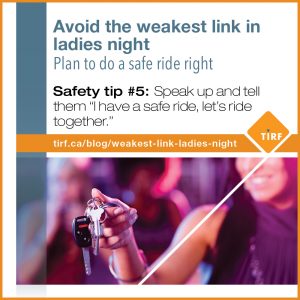 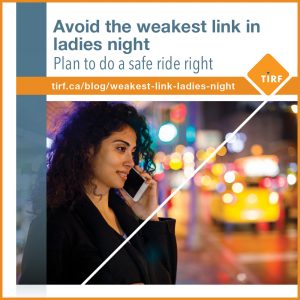